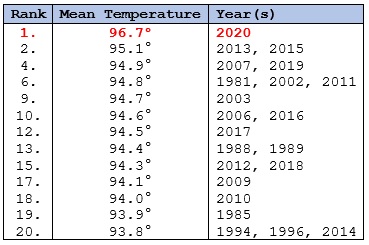 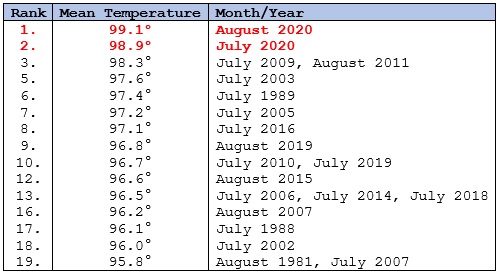 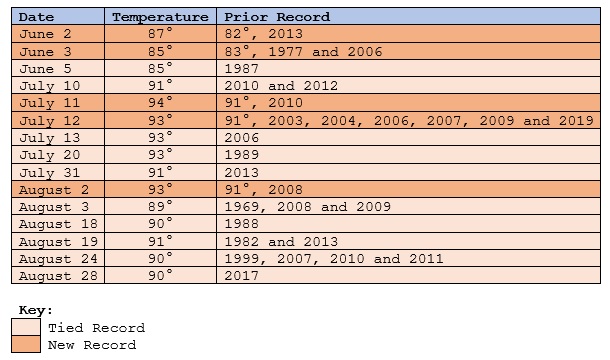 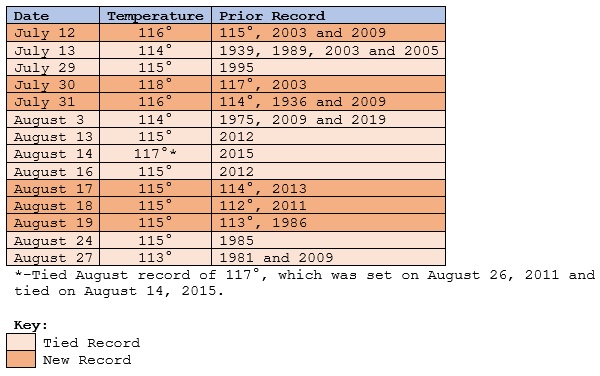 Anthropogenic climate change is driving a warming of Phoenix’s summers. The warming has accelerated in recent decades. The observed global warming since the 1950s is unequivocal with anthropogenic greenhouse gas emissions being the dominant driver of that warming (IPCC Climate Change Synthesis Report 2014). The warming is a global phenomenon with 98% of the world having experienced its warmest 51 years during the current 2,000 years (Neukom, et al. 2019).

Recent research suggests that Phoenix’s climate will resemble that of Baghdad by 2050 (Bastin, et al. 2019). During the summer, Baghdad typically receives no rainfall. Baghdad’s average high temperatures (Weather Atlas 2002-2020) during the summer months are:

Based on the above research findings, summer 2020 provides a glimpse of what a typical Phoenix summer will be like by 2050.

Climate change is also resulting in an increase in the frequency of days on which the low temperature stays at or above 90° and the high temperature reaches 100° or above, 110° or above, and 115° or above.

Anthropogenic climate change, which has turned hot patterns hotter and increased pattern persistence, is largely responsible for this exceptional warmth. Based on the latest research, the extreme heat of summer 2020 will likely become the “new normal” by 2050.