The evening of September 1 is one that residents of New York, New Jersey, and parts of Connecticut will long remember. Not long after Rush Hour had ended, a wall of rain associated with the remnants of Hurricane Ida swept into the region. Continuous flashes of lightning lit up the night sky. The cannon of thunder boomed throughout the region. Sheets of rain fell at an unprecedented intensity. New York City’s Central Park picked up 3.47” of rain in an hour. Newark’s Liberty International Airport recorded 3.62”. Both amounts were the highest on record for a one-hour period.

Rivers rose rapidly. Torrents of angry, swirling water stormed over the banks into streets and homes alike. Cars were caught in the rushing water with some swept away. In Queens, water poured into basement apartments like waterfalls. Power failed as the raging waters overran infrastructure. It was a dark, terrible and deadly night.

What happened? Why was the rainfall so intense?

Tropical cyclones or their remnants have long visited the region. They have often dumped large amounts of rain. What made this different is the short period during which a widespread 6”-9” of rain fell. What also made this different was the furious intensity of the rain that decimated hourly records.

Even as the region picks up the pieces from the recent flood, it is vital that the “why” behind the destructive event and the “who/what is responsible” be made clear.

The “why” concerns anthropogenic climate change. In its Sixth Assessment Report, the Intergovernmental Panel on Climate Change (IPCC) explained:

It is unequivocal that human influence has warmed the atmosphere, ocean and land. Widespread and rapid changes in the atmosphere, ocean, cryosphere and biosphere have occurred… Human-induced climate change is already affecting many weather and climate extremes in every region across the globe. Evidence of observed changes in extremes such as heatwaves, heavy precipitation, droughts, and tropical cyclones, and, in particular, their attribution to human influence, has strengthened since the Fifth Assessment Report (AR5).

SciLine, a free service for journalists and scientists based at the American Association for the Advancement of Science (AAAS), explained:

A growing percentage of U.S. precipitation now comes in the form of extreme events, with human-caused climate change directly responsible for much of this increase… Warm air holds more moisture than cooler air, creating a greater atmospheric reservoir of water vapor for release during rain and snow storms. For every 1°C (1.8°F) increase in atmospheric temperature, the air holds 6% to 7% more water vapor, causing downpour intensity to increase.

So who or what is responsible? Neither such events nor the climate change enhancing them are occurring on their own from purely natural causes, much less for unknown reasons. The fossil fuel industry is the leading and knowing actor in driving climate change. The IPCC’s technical summary explained:

Based on multiple lines of evidence using interhemispheric gradients of CO2 concentrations, isotopes, and inventory data, it is unequivocal that the growth in CO2 in the atmosphere since 1750… is due to the direct emissions from human activities… Of the total anthropogenic CO2 emissions, the combustion of fossil fuels was responsible for about 64% +/- 15%, growing to an 86% +/- 14% contribution over the past 10 years.

The greenhouse effect may be one of the most significant environmental issues for the 1990s… The principal greenhouse gases are by-products of fossil fuel combustion… Climate models predict a 1.5°C to 4.5°C global temperature increase in 100 years – depending on the projected growth in fossil fuel use… Such warming could result in partial polar ice cap melting with associated sea level rise…

Given the company’s understanding, surely it embarked on a course that would mitigate this danger that it had come to understand. Wrong! It sought to paralyze public awareness of the harms associated with fossil fuel combustion. The memo continued, advising:

Emphasize the uncertainty in scientific conclusions regarding the potential enhanced greenhouse effect… Resist the overstatement and sensationalization of potential greenhouse effect which could lead to noneconomic development of nonfossil fuel resources.

Considering ExxonMobil’s historic knowledge, the deliberate strategy it pursued, and the time that was squandered that could have otherwise been devoted to decarbonization, it is clear beyond a reasonable doubt that ExxonMobil in particular, and the fossil fuel industry in general, were knowing actors. In addition, they failed to undertake reasonable efforts to limit the harm inflicted by their products. Therefore, it is not inaccurate to argue that, to the extent that Ida’s destructive floods and they harm they caused can be attributed to climate change, those floods were brought to the region by ExxonMobil and the fossil fuel industry.

Policymakers should not tip-toe around the issue. Policymakers have ultimately held the Tobacco industry, Asbestos industry, and Opioids industry responsible for the harm they inflicted. There is or ought to be nothing sacred about the fossil fuel industry that should confer even limited immunity upon them for the harm they have inflicted to date—knowing harm—and the greater harm they will inflict in the future.

Some photos and videos of the flood and its aftermath:

Video 1: The Sheldrake River breaks out of its banks 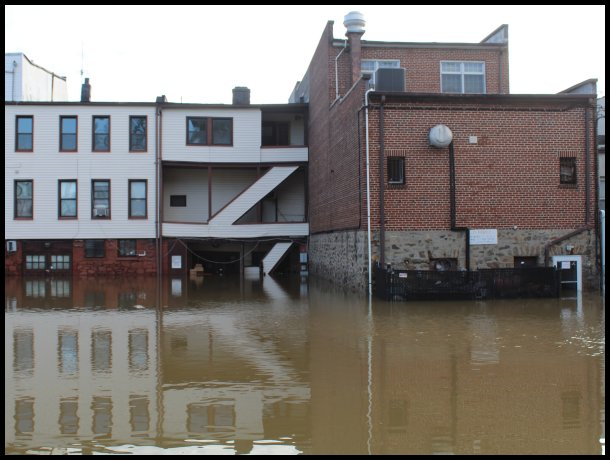 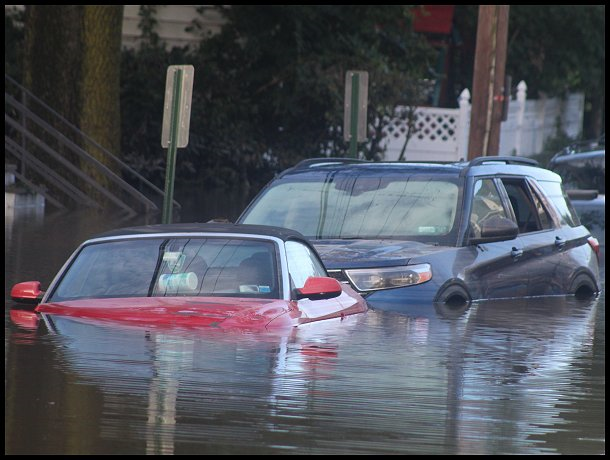 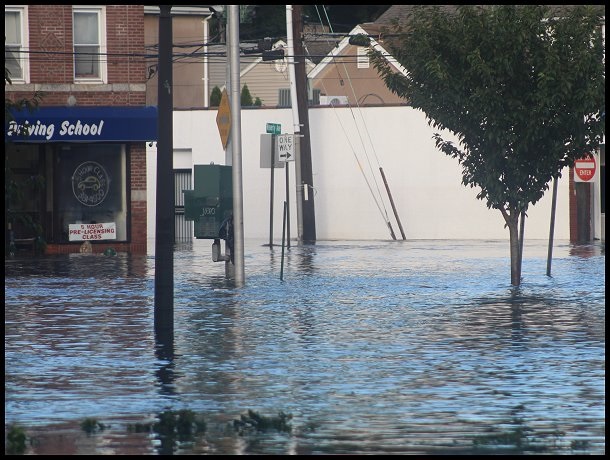 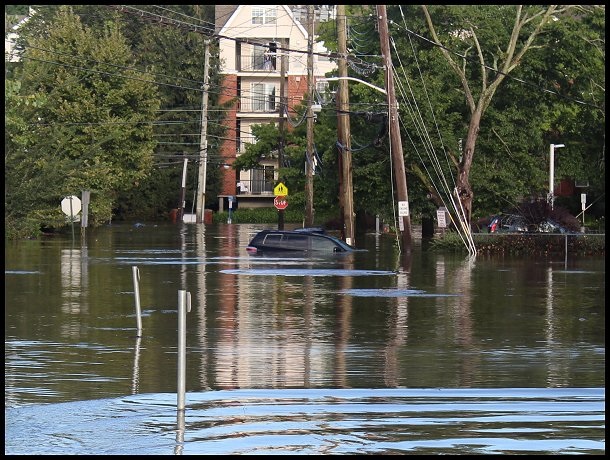 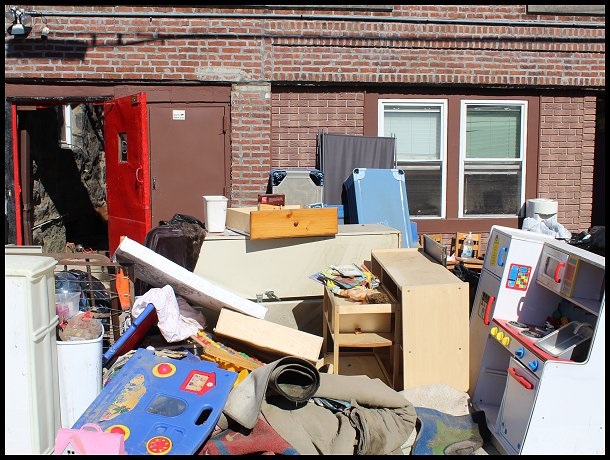 A September 3, 2021 article in Rolling Stone entitled, “Our Summer From Hell,” highlighted the enormous failure of public policy to date. In that piece, Jeff Goodell wrote:

…there is zero accountability for the corporations who have made billions of dollars keeping America hooked on fossil fuels while undermining and distorting the urgency of the climate crisis. What price has ExxonMobil and Shell and BP paid for their years of hawking fuels that they knew very well would heat up the planet and cause wreckage and mayhem for generations to come? None, as far as I can tell.

That needs to change. The lead actors driving climate change need to start paying the bills associated with the damage they have inflicted on the climate system. Society should not be compelled to cover those costs. Further, public policy needs to adopt a path toward rapid decarbonization that phases out fossil fuel combustion in no more than a decade or two to avert even more crippling climate change associated with warming in excess of 2°C (3.6°F) above pre-industrial levels. That transition won’t be smooth and it won’t be painless. The opportunity for a smooth and relatively painless transition was squandered by the fossil fuel industry’s efforts to deny climate change and delay decarbonization. Still, the shift away from fossil fuel combustion is vital if the world is to avert much worse disasters than that which just took place.