A huge meal awaits,
Roast turkey, stuffing, and more
A day of feasting.

So many people,
Family and friends alike,
Around the table.

During the 2015 cycle, 27% of institutions were cited for more than 3 MSCHE standards. That’s 67% above the 5-year moving average.

Number of Standards per Follow-up Request:

The 2015 PRR cycle saw MSCHE issue citations for 11 of its 14 standards. The only standards not cited were Standard 1 (Mission and Goals), Standard 9 (Student Support Services), and Standard 11 (Educational Offerings). Standard 1 has not been cited in any requests for follow-up reports during the last 5 years. For those interested in MSCHE trivia, the last time Standard 1 was cited in a PRR follow-up request was 2010. Then, there were three such references. 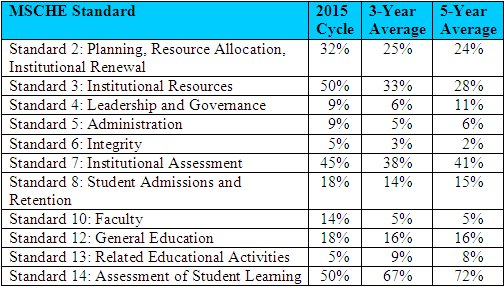 Given the continuing increase in Standard 3 citations, a closer looks is in order. This closer examination will be covered in a subsequent blog entry in December.

The data reveal that institutions in New Jersey and Puerto Rico have received Standard 3 citations in follow-up requests at an elevated rate over the past three PRR cycles. To balance sample size issues with the recent rise in Standard 3 citations, a 3-year timeframe was used.

Standard 3 Citations (% of Follow-up Requests) during the Last 3 PRR Cycles:

New Jersey’s deteriorating long-term fiscal position may be driving the outcome in that state. There, 83% of institutions receiving Standard 3 citations are public colleges and universities. However, some measure of caution is required, as New Jersey’s public institutions received Standard 3 citations in 45% of follow-up requests. Moreover, 85% of New Jersey’s public institutions that submitted PRR reports during the 2013-15 period received follow-up requests vs. 60% of their private non-profit counterparts. That means other factors are likely involved, as well.