A day after the start of astronomical summer in the Northern Hemisphere, today is #ShowYourStripes Monday. Deploying the temperature anomaly stripes pioneered National Centre for Atmospheric Science (NCAS) at the University of Reading climate scientist Ed Hawkins, this is the fourth annual event aimed at reminding the world of the reality of anthropogenic climate change and its growing impacts. 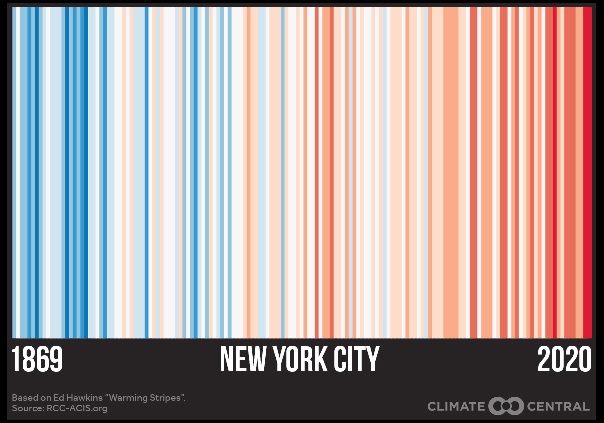 The following are some tables illustrating how the climate has changed at New York City’s three major stations (John F. Kennedy Airport, LaGuardia Airport, and Central Park). Since the 1961-90 base period (which allows for a common comparison between all three stations), New York City has seen warmer years and warmer summers. A disproportionate share of the exceptionally warm summers has occurred 2000 or later.

The stations are labeled as follows:

To date, the New York City region has seen an increase in temperatures and increase in precipitation, as had been well-forecast by the climate models. Out West, things are much worse. As modeled, rising temperatures have been accompanied by falling precipitation. This has increased the likelihood of drought and episodes of extreme heat.

Already, on June 18, the temperature reached 128° at Death Valley, CA, which is a world record for this early in the season. Palm Springs, CA (123°) and Salt Lake City (107°) tied all-time high temperature records. Tucson set a record for most consecutive days with high temperatures at or above 110°. Following a historic summer last year where new records were set for most 100°, 110°, 115° days, most 90° minimum temperatures, and the hottest month on record, Phoenix set a new record for most consecutive days at 115° or above during this year’s extreme heat event.

Anthropogenic climate change is real. It is supported by an overwhelming body of empirical evidence. It is manifesting itself in increasingly persistent periods of extreme weather through resonance events. If society remains largely indifferent or fails to tackle it effectively—political polarization in the U.S. and Russian energy policy both present risks of ineffective action—today’s extremes could become more of a “best case” scenario 30 years in the future. Put another way, what is happening in the Southwest with this June’s historic extreme heat event could become a new hot and dry normal.