January 1, 2023 marked Day 510 since the IPCC declared that it is “unequivocal” that human activities have warmed the climate.” 2022 saw some progress in terms of legislation adopted in the United States to provide incentives for renewable energy. However, there were no plans adopted to cap and then wind down the burning of fossil fuels. No laws were adopted to require that fossil fuel producers begin to cover even a share of the externalities associated with their products. Carbon dioxide emissions reached a new high.

Europe rang out the Old Year and rang in the New Year amidst historic—the word has become so frequently used that it is at risk of losing its meaning—winter warmth. On January 1, monthly temperature records were destroyed across many parts of Europe. Warsaw hit 66°. Delamont, Switzerland reached 68°. Dax, France topped out at 75°. Trois Villes, France soared to 77°. Europeans could well have been forgiven if they confused January 1st with July 1st.

The below map illustrates that average temperature anomalies for December 31-January 1. The Northern Hemisphere was covered by exceptional warmth. 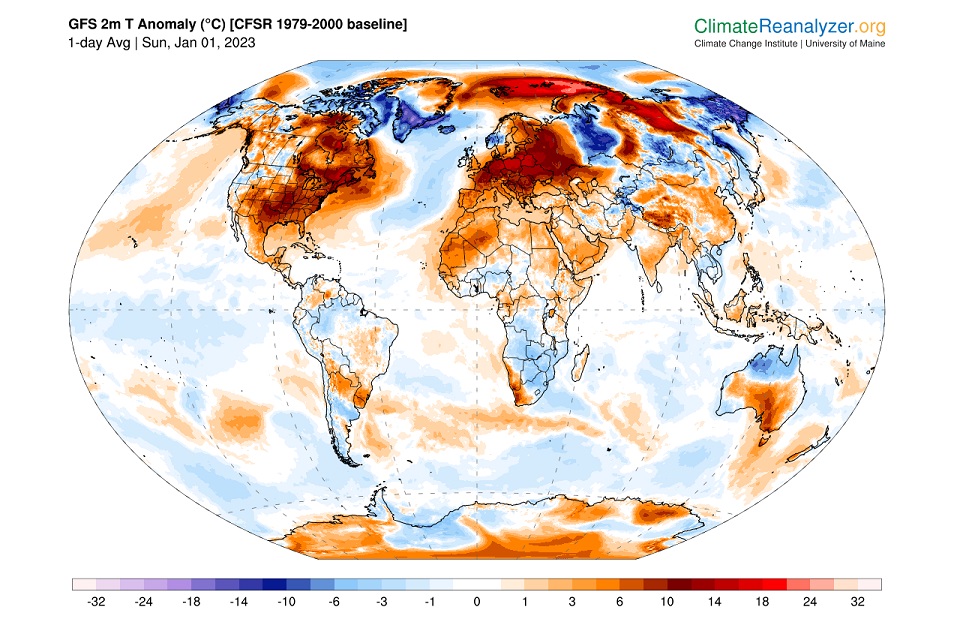 Will 2023 become an inflection point where greenhouse gas emissions peak and then turn downward? The inertia of business as usual suggests that the odds are likely against such an outcome. Many more examples of extreme precipitation and temperature events will likely scar the climate record before the year concludes.