For as long as humans have put their thoughts in writing and recorded history, humanity has documented an insatiable spirit of exploration. In his “Passage to India,” 19th century American poet Walt Whitman observed humanity “wandering, yearning, curious with restless exploration.” At that time, there were real limits on exploration. Whitman explained that exploration entailed “the oceans to be cross’d, the distant brought near, the lands to be welded together.”

Not today. Now, exploration extends beyond the Earth, its land masses, and its oceans into the vast reaches of space. Even as the distance involved is so great that no humans can get far beyond the Earth within a single or even many lifespans, human exploration has seemingly broken the shackles time and space have imposed on it.

July 11-12, 2022 were seminal dates that marked what promises to be a renewed age of discovery. From its vantage point nearly one million miles from Earth, the James Webb Space Telescope (JWST) has taken human exploration far beyond the limits of our Earthly existence. Its powerful sensors can now reach seemingly into the realm of our imagination, if not beyond.

Already, the JWST has peered some 13 billion light years into the distance. In doing so, it has enabled humanity to turn the Universe’s clock back to near the very beginning. At that time, the Universe was young, countless stars were in their infancy, countless others were still to be born, and there was no Earth, much less people.

Why didn’t humanity content itself with its growing knowledge of its own planet? Why has it pushed into space? On its website, NASA explains:

Humanity’s interest in the heavens has been universal and enduring. Humans are driven to explore the unknown, discover new worlds, push the boundaries of our scientific and technical limits, and then push further. The intangible desire to explore and challenge the boundaries of what we know and where we have been has provided benefits to our society for centuries. Human space exploration helps to address fundamental questions about our place in the Universe and the history of our solar system. Through addressing the challenges related to human space exploration we expand technology, create new industries, and help to foster a peaceful connection with other nations.

As long as humans occupy the Earth (or perhaps subsequently spread beyond it), human exploration in pursuit of discovery will continue. After all, to explore is to be human. Exploration is an inherent part of human nature. The preface to Episodes of Discovery (Blackie & Son, 1880) vividly connected exploration to human nature:

The love of adventure and discovery has ever been a prominent feature in the human character; and there are few great nations in the world which have not been represented on land or sea in the search for new countries and continents. From the earliest days of written history there have been found men of great minds, and imbued with the most powerful faith, who have risked their lives and reputations in the exploration of unknown countries, and in the discovery of new worlds far off.

That “glorious impulse,” as that book described it, continues today. To cease exploration would be to lose everything that humans are. Astrophysicist Neil deGrasse Tyson explained, “The day we stop exploring is the day we commit ourselves to live in a stagnant world, devoid of curiosity, empty of dreams.” That would be a sterile world in which life would lose all meaning. Empty existence is not life, much less living. It is simply a state of passive being. Nothing more.

JWST is the newest ship that has sailed into the unknown. It has embarked on a journey that will take humanity on voyages deeper than ever into space and time. Already, it has provided some extraordinary images. Two of them are below. 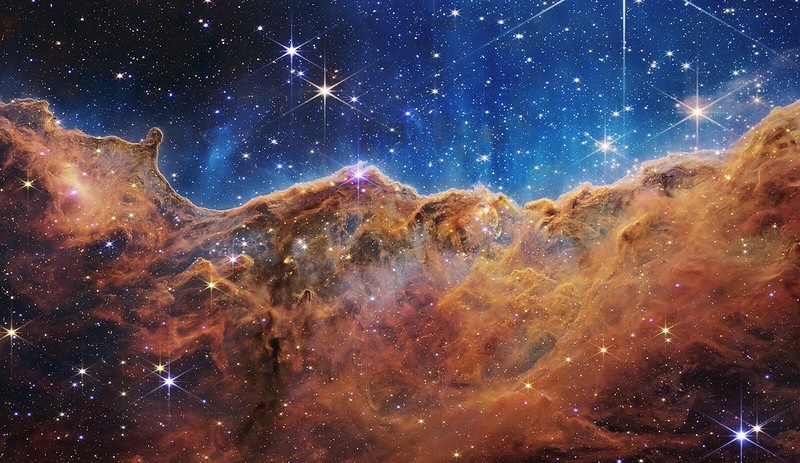 This is just the exciting beginning. So much more lies ahead. As Whitman commanded: