Lennox: Goes the king hence to-day?
Macbeth: He does: he did appoint so.
Lennox: The night has been unruly: where we lay,
Our chimneys were blown down…
Macbeth: ‘Twas a rough night.

Lennox’s account and MacBeth’s summary description could well describe the night of August 25, 2017 when Hurricane Harvey made landfall between Aransas and Port O’Connor in Texas as a Category 4 hurricane with maximum sustained winds of 130 mph. Moreover, one could just as easily have edited the timeframe in Macbeth’s reply to incorporate the days of Harvey’s extreme rainfall—a large area, including the Houston metropolitan area, was drenched with 30” or more rainfall—to read “‘Twas a rough week.”

Economic, financial, political, and even natural events can provide insights into the content of various academic courses. Headline events capture attention and can, if leveraged appropriately, enhance the student learning experience. In my Strategic Management course, I used the example of Harvey to illustrate concepts such as probability, risk, and uncertainty and the impacts of such concepts on business decision making e.g., pricing.

To introduce those concepts, I used the example of Harvey’s rainfall at Beaumont, Texas (Beaumont-Port Arthur area). This area was selected, because its climate record extends back more than a century to 1901. On August 29, a total of 26.03” rain fell at Jack Brooks Regional Airport. The previous all-time daily record was 12.76” from May 19, 1923. The August monthly record was 17.26” from 1966, while the most rainfall in any month was 22.74” from November 1902. By the time August concluded, Beaumont had registered 54.74” rain for the month.

As my class was held on August 30, I did not yet have the final figure. Nevertheless, the question that was raised to illustrate the above-noted concepts were was the frequency or return time in years of an August during which 40” or more rain fell. This question was used as a proxy for dealing with a high-impact, very low probability event.

Until Harvey, the city’s climate record had no such occurrences where August’s (or any other month’s) rainfall reached or exceeded 40”. Yet, tempting as it might be, one could not reasonably conclude that no occurrences of a given event meant no probability of such an event. The absence of events in the historical record can skew perceptions leading to a discounting of risk. A discounting of risk can lead to business decision making that results in greater cost exposure than what is otherwise appropriate.

Statistically, power distributions can be used to estimate such risks. While the class is not required to construct such distributions, both pre-Harvey and post-Harvey distributions for the return times of monthly rainfall up to 50” were calculated to illustrate the existence of such risk and, subsequently, how the occurrence of events can impact the understanding of such risk. The chart from the relevant slide is below: 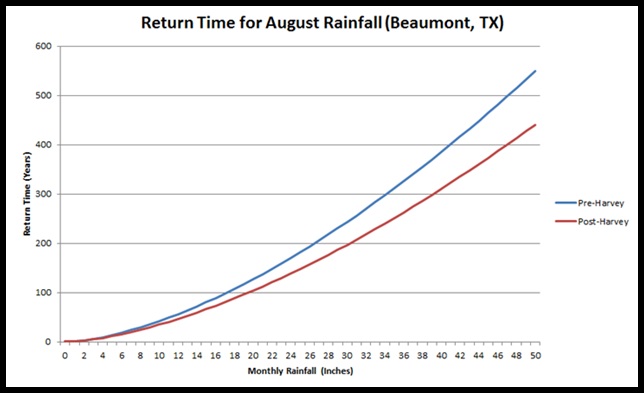 Afterward, the discussion focused on a number of variables through which risk exposure plays out including but not limited to Price-Earnings (PE) ratios and the cost of capital. For illustrative purposes, a sample investment (cost and income stream) was utilized. At the initial discount rate, the net present value of the cash flows was positive. Under that scenario, it made sense for a given business to make the investment, all other variables held constant. Under an alternative scenario where the discount rate was increased by 25% over the initial value (not 25 percentage points), which was approximately the statistically-implied increase in frequency of 40” or more rainfall in August following Harvey, the same investment had a negative value. In sum, inadequate consideration of business risk would lead to a decision that looked promising (positive net present value), but would actually be unfavorable (negative net present value) with a fuller consideration of the latest understanding of risk.

The remainder of the lecture focused on a variety of “unexpected” business events that could have a long-term material impact on a company. Such events included a long-term decline in revenue/profit growth, an increase in revenue/earnings volatility, the arrival of a powerful competitor in the company’s industry, the emergence and evolution of a disruptive technology, among others. The main takeaways were the reality that the environment in which companies operate is not static, companies have limited influence over parts of the environment in which they operate, premises on which business models have been constructed need to be questioned on a regular basis, and new information can change underlying understanding as it relates to both risks and opportunities.