On this day, the nation remembers one of its greatest visionaries and champions of justice, Dr. Martin Luther King. Regular occasions on which the nation can remember Dr. King, his struggle for justice, and his vision of a better world, are important. The historical experience has demonstrated that there is no “resting place” in the quest for civil rights. Civil rights are secured and preserved only through the sustained effort of each generation. With human nature being what it is, faded memories or complacency can create risks of regression.

Nothing I could write could capture the essence of Dr. King stood for in the way his timeless words can. Therefore, on this important day, I will quote excerpts from two of his speeches: His August 28, 1963 address before the Lincoln Memorial in Washington, DC (his “I Have a Dream” speech) and his 1964 Nobel Lecture.

In his 1963 speech, Dr. King articulated the importance of achieving justice through non-violent means. He sketched a vision of a future in which the United States would enjoy “a beautiful symphony of brotherhood.” He declared:

In the process of gaining our rightful place, we must not be guilty of wrongful deeds. Let us not seek to satisfy our thirst for freedom by drinking from the cup of bitterness and hatred. We must forever conduct our struggle on the high plane of dignity and discipline. We must not allow our creative protest to degenerate into physical violence. Again and again, we must rise to the majestic heights of meeting physical force with soul force.

This is our hope, and this is the faith that I go back to the South with.

In his Nobel Lecture, he reaffirmed his principle of seeking justice through peaceful means. He highlighted the limitations of resorting to violence in the pursuit of justice. He explained:

Violence as a way of achieving racial justice is both impractical and immoral. I am not unmindful of the fact that violence often brings about momentary results. Nations have frequently won their independence in battle. But in spite of temporary victories, violence never brings permanent peace. It solves no social problem: it merely creates new and more complicated ones. Violence is impractical because it is a descending spiral ending in destruction for all. It is immoral because it seeks to humiliate the opponent rather than win his understanding: it seeks to annihilate rather than convert. Violence is immoral because it thrives on hatred rather than love. It destroys community and makes brotherhood impossible. It leaves society in monologue rather than dialogue. Violence ends up defeating itself. It creates bitterness in the survivors and brutality in the destroyers…

The nonviolent resisters can summarize their message in the following simple terms: we will take direct action against injustice despite the failure of governmental and other official agencies to act first. We will not obey unjust laws or submit to unjust practices. We will do this peacefully, openly, cheerfully because our aim is to persuade. We adopt the means of nonviolence because our end is a community at peace with itself. We will try to persuade with our words, but if our words fail, we will try to persuade with our acts. We will always be willing to talk and seek fair compromise, but we are ready to suffer when necessary and even risk our lives to become witnesses to truth as we see it.
.
Today, Dr. King’s words continue to ring out with clarity. Across the expanding frontier of time, they are as vital today as they were when Dr. King first spoke them. In the United States, much progress has been made in advancing Dr. King’s vision. Visible signs of that progress can be found on university campuses, in corporate boardrooms, and even in the nation’s highest echelons of power, as the nation has not only elected, but also re-elected, its first African American President.

Nevertheless, the need to press ahead continues. Sustained effort is a prerequisite of making those gains permanent, as well as expanding those gains in civil rights. Taking some time to read and reflect on the two speeches cited in this piece can help provide the inspiration for maintaining that effort. 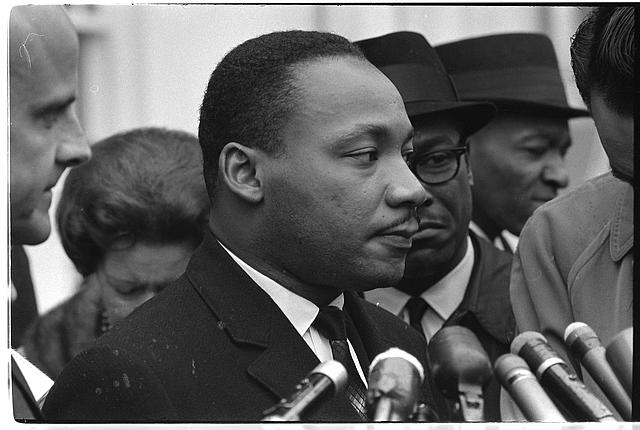 Martin Luther King, facing right, at microphones after having met with President Lyndon Johnson on December 3, 1963. (Source: Library of Congress)