2020 was the 13th year on record where Phoenix recorded a mean temperature of 90.0° or above in September. 9/13 (69%) of those years have occurred 2000 or later and 4/13 (31%) have occurred 2010 or later. September 2020 is the most recent example demonstrating that anthropogenic climate change is producing what amounts to a lengthening summer.

In addition, all five September cases with a monthly mean temperature of 91.0° or above occurred 2000 or later. Four (80%) of those cases occurred 2010 or later. 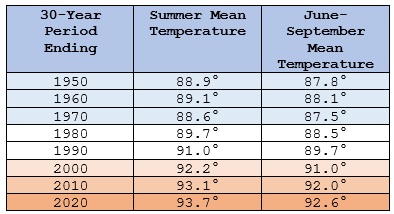 Just as summer 2020 provided a foretaste of the kind of summers that are expected to become routine by 2050 on account of climate change, September 2020 and the June-September 2020 period offered a glimpse into the future of longer summers that will continue to emerge from the evolving climate regime.