If the just-released Periodic Review Report (PRR) outcomes could be summarized in two themes, those themes would likely be the increased emphasis on Standard 3 (Institutional Resources) and the continuing focus on Standard 14 (Assessment of Student Learning). Standard 3 was cited in 32% of the Middle States Commission on Higher Education’s (MSCHE) requests for follow-up reports, which fell barely below the 36% figure from the “Financial Crisis” PRR cycle of 2008. For the first time, Standard 3 was the second most cited issue in such requests. At the same time, Standard 14 was cited in 76% of follow-up requests, also the second highest percentage since 2008. Standard 14 has consistently been the most frequently cited MSCHE Standard in follow-up requests arising from both the Self-Study Report and Periodic Review Report with the exception of the 2013 cycle when Standard 7 was cited somewhat more frequently in Self-Study-related follow-up requests.

During the 2014 cycle, 54% of PRR reports resulted in follow-up requests. That figure is little changed from the 5-year moving average (55%) and 3-year moving average (56%). It should be noted that a few institutions that submitted Self-Study Reports in 2009 had their PRRs delayed until 2015. CUNY schools fared somewhat better with 40% receiving requests for a follow-up report.

The 2014 PRR cycle saw MSCHE issue citations for 8 of its 14 standards. The below table shows the percentage of times a given MSCHE standard was cited in follow-up requests arising from the PRR.

Considering the large increase in Standard 3 citations, a closer look is in order. Unlike the 2008-10 timeframe that included a financial crisis, deep recession, and the aftermath of those financial and macroeconomic events, the current increase has occurred during a period of ongoing economic growth. 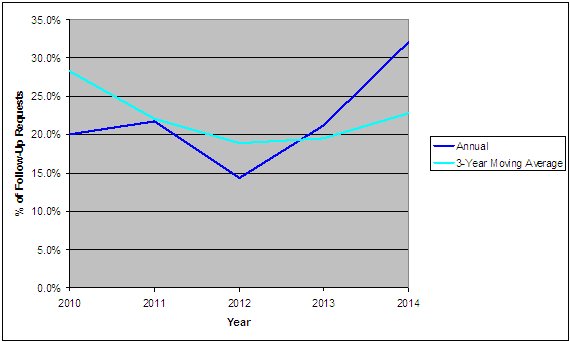 The detailed reasons behind the citations were as follows:

Special focus institutions continued to draw the highest percentage of follow-up requests. In 2014, special focus schools saw follow-up requests from 71% of their Periodic Review Reports. That is somewhat above the 5-year moving average (66%) and 3-year moving average (67%) for those schools. Assessment-related issues (Standard 7 and/or Standard 14) have played the largest role in that outcome. Eliminating assessment-related issues would also have eliminated the gap between special focus institutions and all other institutions when it comes to Periodic Review Report outcomes during the 2010-2014 timeframe. Put another way, sustained and robust assessment infrastructure and efforts can lead to better accreditation outcomes.

Finally, the biggest turnaround from the 2009 Self-Study Report to the 2014 Periodic Review Report was achieved by Trocaire College in Buffalo, New York. Trocaire College received a follow-up request covering six MSCHE standards subsequent to its Self-Study submission. Five years later, the College received no follow-up requests from its Periodic Review Report. Therefore, if one is looking for a case study in which big turnarounds in compliance with accreditation requirements are possible, Trocaire College offers one such example.

One thought on “2014 Periodic Review Report Outcomes: A Snapshot”