A warm synoptic pattern that occurred within the context of increased anthropogenic greenhouse gas forcing resulted in exceptional and persistent record-breaking warmth this summer. During June-August 2019, Anchorage experienced its warmest summer on record by 2.0°F (1.1°C). Its summer mean temperature (62.815°F/17.119°C) exceeded that of its warmest month on record prior to 2019 (62.694°F/17.052°C in July 2016).

Summer 2019 saw Anchorage record its warmest-ever June, July, and August. Anchorage tied its all-time record high minimum temperature on two consecutive days. Anchorage reached 90°F (32.2°C) for the first time on record. The duration of the excessive warmth and extreme temperatures recorded during the summer would have been very unlikely, if not improbable, without human-induced climate change.

The observed global warming since the 1950s is unequivocal with anthropogenic greenhouse gas emissions being the dominant driver of that warming (IPCC Climate Change Synthesis Report 2014). The warming is a global phenomenon with 98% of the world having experienced its warmest 51 years during the current 2,000 years (Neukom, et al. 2019).

Since 1880, Arctic temperatures have been increasing at more than twice the rate of global temperatures (GISTEMP Data Set). In recent decades, the rate at which the Arctic has been warming relative to worldwide temperatures has increased. From 1980 through 2018, the Arctic has warmed at a decadal rate of 1.51°F (0.84°C), which is just over 3.5 times the global rate (GISTEMP Data Set). Multiple lines of evidence corroborate the rapid warming that is taking place in the Arctic. Increases in humidity, precipitation, river discharge, glacier equilibrium line altitude and land ice wastage; warming of near-surface permafrost; and, decreases in sea ice thickness and extent, and spring snow cover extent and duration are consistent with rising temperatures (Box, et al. 2019).

Consistent with the Arctic warming, Alaska has recently experienced temperatures that are warmer than they have been at any time in the past century (Thoman et al., 2019). As Alaska has warmed, Anchorage has also experienced rising temperatures. A disproportionate share of Anchorage’s warmest months has occurred in 2000 or later. 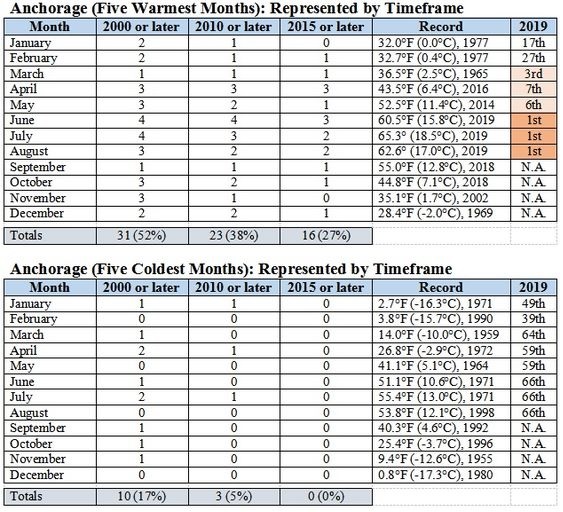 The long duration of the AO-/EPO- synoptic pattern led to the relentless persistence of above to much above normal temperatures in Anchorage that allowed monthly warm temperature records to be set in June, July, and August. Rapid Arctic warming has contributed to an increasing frequency of long-duration upper air patterns (Francis, et al. 2018). Should the world warm 3.6°F (2.0°C) above its pre-industrial temperatures, the persistence of boreal summer weather will likely increase further (Pfleiderer, et al. 2019). 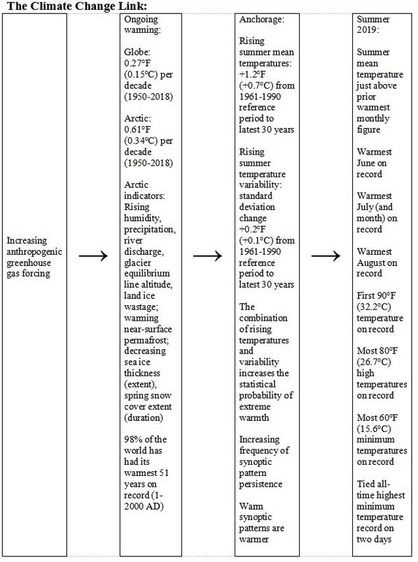 Based on the above evidence, human-driven climate change played a key role in bringing about Anchorage’s historic summer warmth. Without anthropogenic warming, the combination of the exceptional heat and remarkable duration of the warmth in Anchorage would have been very unlikely, if not improbable.